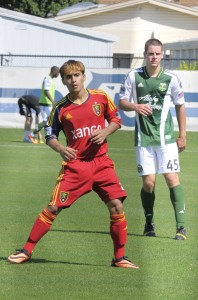 Update – Real Salt Lake has called up defender Corey Nemeth. This is his first call up.

The Claret-and-Cobalt hosted the Timbers the week before and bested the visitors, 1-0. Hernandez and Ovalle saw the field in the final minutes of play and impressed in their brief appearances.

This is the second call up for Glad, who came off the bench and played 81 minutes in his first call up against USL PRO side Phoenix FC on June 15th.

Sunday’s match will be held at Jeld-Wen Field at 6:00 p.m. PST. Fans can follow the action on the Real Salt Lake Twitter account and the Portland Timbers Twitter account. The match could also feature former academy graduates Benji Lopez and Lalo Fernandez who have both signed with Real Salt Lake.