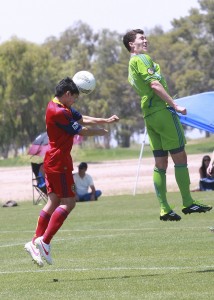 Two of the top Major League Soccer academies took to battle at Grande Sports World. Real Salt Lake-Arizona is fighting to win the difficult SoCal Division and Seattle Sounders is in first place in the Northwest Division.

RSL-AZ continued to pile on the pressure as Seattle was content to sit in and look to counter attack. With halftime approaching, the Sounders tactics were rewarded as Austin Sweeney finished off a quick counter, tying the game 1-1 going into halftime. 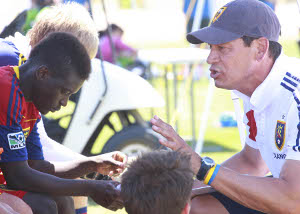 RSL-AZ, Head Coach Martin Vasquez, had some choice words for his team at the halftime break and Real Salt Lake – Arizona came out determined to finish off their chances in the second half. RSL-AZ’s US under 18 National team player, Jordan Allen, put his team ahead with a penalty kick. Allen, with a great individual run sliced into the box past two Seattle defenders before being pulled down as he was about to shoot. The Real Salt Lake – Arizona midfielder made no mistake with the spot kick. 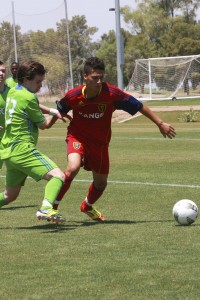 In the 76th minute Real Salt Lake – Arizona added their third goal of the game as substitute Danny Gavin hit an unstoppable shot high into the net with the Sounders keeper well beaten.

RSL-AZ, continued their onslaught of the Seattle goal and were again rewarded as Sounders defender, Jacob Beck, could only redirect Cole Nagy’s shot on to the post and ultimately into the back of the net for an own goal, giving RSL-AZ a three goal cushion. Real Salt Lake-Arizona’s under 18’s came away with a resounding 4-1 victory.

RSL-AZ’s under 16 team came out playing some good football against a very good Seattle Sounders academy that currently sit in first place in the USSDA Northwest Division. The first half was very entertaining with both teams creating chances but defense prevailed and the teams went into halftime with no score. 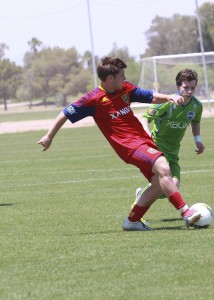 Two minutes into the half, Real Salt Lake – Arizona got the opening goal as Jose Navarro fought his way into the penalty area before stroking the ball home.

Seattle’s response was almost immediate as they notched two goals in the next 10 minutes. David Olsen opened the scoring in the 45th minute and Duncan McCormick put the Northwest team ahead 2-1 in the 50th.

With time running out, RSL-AZ came back to tie the game and will share the points. A long through ball to the right wing caught the Seattle defense flat and Michael Gray barreled in on goal drawing the goalkeeper before sliding the ball into the goal.

RSL-AZ ‘s academy teams next play Real So Cal, Sunday, May 13. Kick offs are 10:00 am and 12:30 pm respectively at Grande Sports World, Casa Grande, Arizona. The public is invited to watch Real Salt Lake – Arizona continue its campaign to win the SoCal Division. The legendary Francisco Grande Hotel and Golf Resort has fabulous room rates and has an incredible Mother’s Day Brunch. Make it a special weekend for the family and call 800-237-4238 to make room reservations.