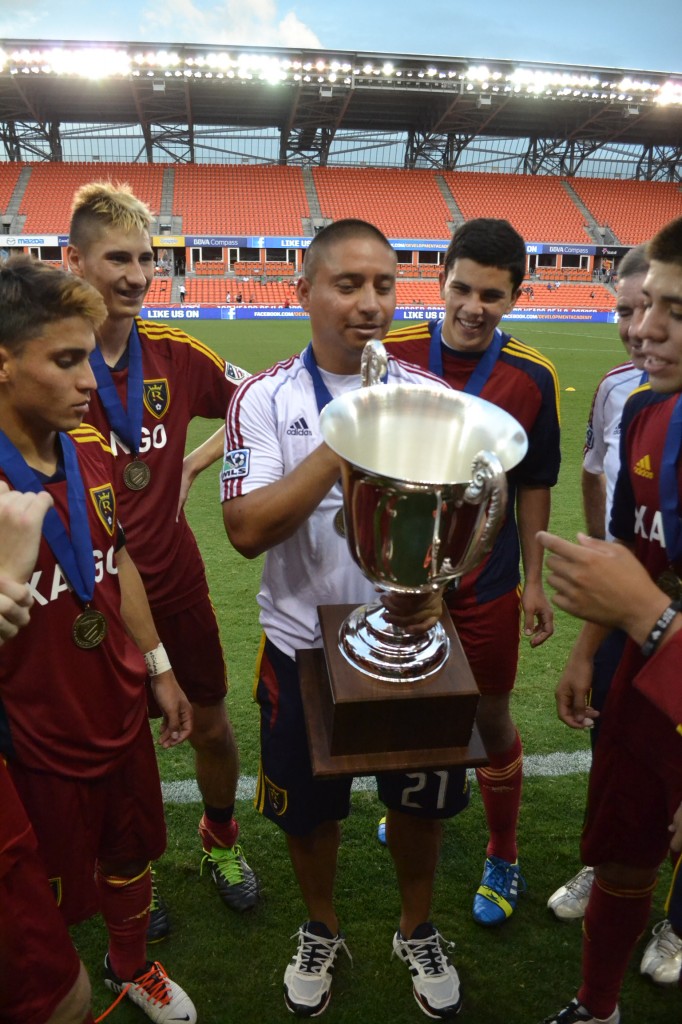 Coach Freddy Juarez: “The boys deserved this championship. There is nobody in the country that sacrifices more.”

Fito Ovalle: “After sacrificing everything, it feels good to have achieved what we have been wanting since day one.”

Alex Knox: “Always believe you’re great, even before anybody says so.”

Justen Glad (Scored the 3rd goal in the championship game): “It feels great to go out and win after sacrificing so much to play for the Real Salt Lake Academy. I know a lot of the kids at the academy haven’t been home in eleven months and for it to all come together, and for us to bring home the national title is a great feeling. Solar Chelsea is a great team and they played us hard, but we just went out as one and stuck to our style of play and everything worked out. There is no better feeling.”

Jason Eng: “Winning a national championship with Real Salt Lake has been an amazing journey. I joined this academy two and a half years ago, and I never knew I would one day be lifting the trophy with this team. All the sacrifices and perseverance I’ve made has finally paid off, and I just want to thank all of the coaching staff for their tremendous dedication and support. I also want to remind everyone that it would not have been possible without the help of the entire Academy, including the ones that did not get to come on this trip. It took the entire program to win this championship and we deserved it.”

Jack Gayton: “I think that we were confident going into the game with it being such a big field, since we’re a possession oriented team. So we used the width of the field to our advantage, which gave us good success.”

Bayley Scholz: “It was a surreal feeling. I remember sitting at home on my computer last year watching the championship game between Scott Gallagher and New York Red Bulls and wishing I could be there. Real Salt Lake gave me a chance to be there, I feel blessed. A dream come true and a memory that I’ll cherish forever.”

Chase Bishov: “Being on U.S. youth soccer’s biggest stage, the Academy National Final, I have come to realize how many people support and look up to us. And being a part of the Real Salt Lake Family through this season, I’m starting to fully understand that we aren’t only playing for ourselves. We are playing for our city, our state, our organization and our supporters. I’m glad that we showed those who look up to us that with hard work, sacrifice, and true belief one can achieve their dreams. That is what we did on that pitch today– Won a national championship for those who lacked the courage or the confidence to chase after their dreams. Let’s hope they follow.”

Sebastian “Bofo” Saucedo (Scored the 2nd goal in the championship game): “All this sacrifice of living away from home has paid off. I think that we have shown who the best team in the nation is by winning it all.”

Adam Ferguson: “It was a great experience to be able to lift the trophy. Also it really shows how good of a team we are and how fantastic our coaching staff is.”

Jose Hernandez: “Amazing experience. Worked so hard for eleven months and it’s nice to know that all the sacrifices that each of is made was worth it. We played ‘As One’, and showed that we are the best team in the country.”

Josh Doughty: “We won because we stuck to the game plan until the very end and trusted our coaches.”

Luis “Wicho” Barraza: “Eleven months of hard work paid off in the end. We wanted to make history and we all did it ‘As One’. It was a collective effort of everyone throughout the whole week. We managed to stay disciplined and thanks to that we were successful.”

Diego “Diablo” Silva: “I’m very thankful to the club for giving me the opportunity to show what I have and what I’m capable of.”

Brooks Lennon (Scored the 1st goal in the championship game): “It just feels amazing knowing all the hard work we have put in all year has earned us a national championship.”