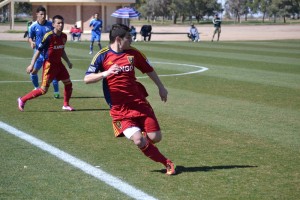 The shutout, RSL’s second since October, comes against a team that was tied for 5th in the nation with 40 goals scored.

“We are pleased but not only the result but how we played overall,” said Head Coach Martin Vasquez. “Zero goals against our defense that was solid and strong in the game. No doubt we are pleased and happy with the game.”

Defender Jonathan Stadler spoke the importance of the shutout saying, “I think that being able to grab a shutout was something we haven’t down in a while. We need to improve that and this is one step towards that.”

Along with a stand out performance on defense that limited San Jose’s chances to a few attempts, RSL’s offense looked impressive throughout the entirety of the game. Immediately from kickoff RSL controlled the pace of the game. Shots by Ive Burnett, Andrew Brody, Coco Navarro and deadly crosses by Tigran Tiraturyan all were blocked or just missed their mark within the opening minutes of the first half.

After threatening the Quakes goal for 39 minutes, RSL was finally able to crack the San Jose defense when Jonathan Stadler picked up a loose ball in the box and fired in into the net for his first on the season.

RSL went into the half with the lead 1-0. They doubled this lead two minutes into the second half when, Marquette signee,  Coco Navarro scored his 11th goal in 5 games. RSL had a few more chances after this goal but primarily played a possession game as the second half went on. San Jose had two chances late but a miss and a goal saving block by Luis Barraza preserved the shutout.

After the Barraza block RSL caught San Jose’s defense off guard and counter attacked. Jose Hernandez dribbled into the box on the right side and passed it to wide open Tony Murillo who easily scored RSL’s third on the day.

The game was ended just seconds after the goal giving RSL a 3-0 victory.

Next game for RSL-AZ is on Saturday, February 23rd when they Cal Odyssey. Game time is 11:00am.