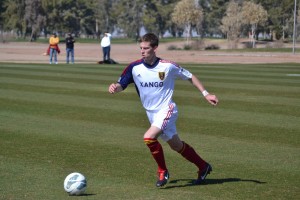 The winning streak, 4 games, is the now the longest for the club this season. The previous winning streak length was 3 games in October.

“The game was a battle and it’s always going to be against California teams,” said assistant coach Tony Bruce. “They come to compete and if you get caught in their game you can lose but I thought we played our game especially in the second half. We knocked the ball around and that was the difference. They couldn’t match us as we played our game.”

RSL was quick to gain dominance in the game due in part to the Odyssey starting with one player up top and opting to hold back their entire team in their half of the field.

RSL’s first chance came in the 20th minute when Tigran Tiraturyan played a ball over the top that just missed the out stretched leg of Coco Navarro. Navarro had another chance 4 minutes later when he took a shot from the 18 that sailed wide right.

The next chance to RSL came in the 34th minute when Andrew Brody took a shot that was blocked by the arm of an Odyssey defender. Navarro stepped up and converted the PK, which extended his scoring streak to 6 consecutive games.

RSL had one more chance before halftime when Tiraturyan sent a screamer at the net that was blocked by a diving Odyssey GK.

After absorbing RSL’s attack for 45 minutes, Odyssey changed their game plan at the start of the second half sending more players forward.

“It was nice for us because they were just sitting back the whole first half and it was really hard to do anything against them,” said Jose Hernandez. “When they started to push up we started to have more space and created more opportunities.”

RSL’s first chance in the second half came in the 62nd minute when Hernandez dribbled into the box from the right-wing. He then passed to a unmarked Tony Murillo who’s shot was blocked by a diving Odyssey defender in front of the goal.

Two minutes later Hernandez then sent a dangerous cross into the box that was headed over the goal by a RSL player.

RSL doubled their lead in the 69th minute when Sasivarevic sent a free kick into the box. The ball, going deep, was headed back to the 6 yard line by Santi Carrillo. Jonathan Stadler pounced on the loose ball and scored.

Stadler has now scored in back-to-back games, with both goals off of set pieces within 6 yards of the opponent’s goal.

“It feels great to be honest. Guys are starting to name me the garbage man,” Stadler said.

Odyssey were able to cut the two goal lead in the 90th minute when they countered and caught RSL’s defense out of position. Their comeback attempt was ended seconds later when the final whistle was blown.

“Team played great.,” said GK Cesar Cobos. “It all started with the forwards and it carries out to the defense. Makes the keepers life easy.”