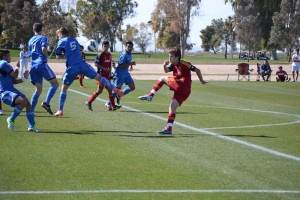 “Sometimes you have two or three players that have a bad game. But in the first half we had 5 or 6,” said Head Coach Martin Vasquez. “We didn’t fix it with the guys that came in and we didn’t fix in the second half. It hurts to lose always because we prepare and work hard. But today we have to be honest and take responsibility. We didn’t do enough to win the game.”

RSL got on the board first when Brooks Lennon countered of the left-wing. His cross into the box missed Bofo Saucedo, but a mistimed clearance by a San Jose player saw him kick the ball into the net for an own goal.

This was the only time RSL would have advantage in the game. San Jose’s attack, led by forward Alex Luia, was relentless throughout the game. RSL has difficulty controlling the ball and the defense lacked the urgency to keep up with San Jose.

San Jose scored in the 15th minute when RSL turned the ball over in the backfield. A well-timed counter attack by San Jose saw them equalize the score.

RSL settled down after this goal and were able to go into the half with the game tied.

The start if the second half wasn’t any different for RSL as Luia continued to cause problems for the defense. RSL made changes throughout the half but coaches couldn’t find an answer for RSL’s lethargic play. Another defensive breakdown by RSL allowed the Quakes grab the lead in the 67th minute.

The Quakes scored again in the 79th minute eliminating any chance for a RSL comeback.

Next game for RSL-AZ is on Saturday, February 23rd when they Cal Odyssey. Game time is 1:30pm.