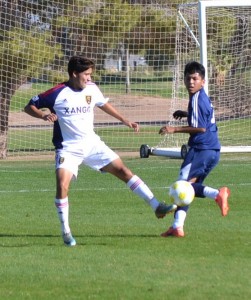 CASA GRANDE, Ariz. – The Real Salt Lake U-16 Elite team will be seeking their first points in the Far West Regional League when they travel to Phoenix for a midweek match against SC del Sol at Rose Mofford Sports Complex on Wednesday night.

The Claret-and-Cobalt kicked off FWRL in Park City, Utah, in late September dropping three matches. Since then, the U-16 team has vastly improved and just recently won the Arizona State League Division II title after going 6-0-1. Their opponent, SC del Sol has not dropped any points through three matches in FWRL play.

Due to the geographical distances for the clubs, member associations have been divided up into regions with Arizona clubs in the Desert Premier Soccer Division along with: Utah, Nevada, New Mexico and Colorado.

The RSL U-18 Elite team will play nine other clubs in a round-robin format, with the winner advancing to the next round. Last year’s US Youth Soccer Region IV Championships were held in Honolulu, Hawaii.