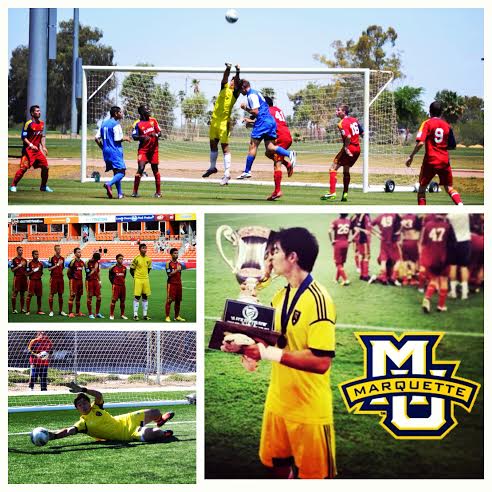 Barraza joins a Marquette program that has earned consecutive berths in the NCAA Division I Men’s Soccer Championship and has been on a steady rise under the leadership of head coach Louis Bennett who took over the fledgling program in 2006.  Barraza’s former teammate Coco Navarro, who wrapped up his freshman year at Marquette this year, scored the winning goal in overtime over Akron in this year’s College Cup, which gave Marquette their first ever NCAA Tournament victory.

Playing with Navarro again was an opportunity Barraza didn’t want to pass up.

“I was close to Coco and to have someone like that at Marquette is nice. He is a good friend and I felt comfortable going there,” he said. “Plus I want to play with him again”

Barraza is currently in his second season at the Real Salt Lake Academy, he has started in all but one game and has earned the clean sheet in four matches for the Claret-and-Cobalt.  Last year, in his first year at the Academy, Barraza split time between the U-15/16 and U-17/18 teams, starting in 22 matches and appearing in 26. Barraza was named the starting goalkeeper for the U-15/16 team in the U.S. Soccer Development Academy Finals Championship win over Solar Chelsea on July 20th, 2013.

Barraza’s commitment wasn’t all about soccer as numerous factors went into his decision.

“They are a good school academically and on the field they are equally as good,” said Barraza, who currently holds a 4.2 GPA. “The whole staff was very welcoming and I felt it was a good fit for me. My family also liked it, which made it even more appealing to me.”

However, there is no denying that soccer was a major factor in the decision and when Barraza was asked about Marquette’s style of play, a smile flashed across his face.

“They play good soccer. They knock the ball around and try to play how we play at the Academy. It made me feel really comfortable going to Marquette.”