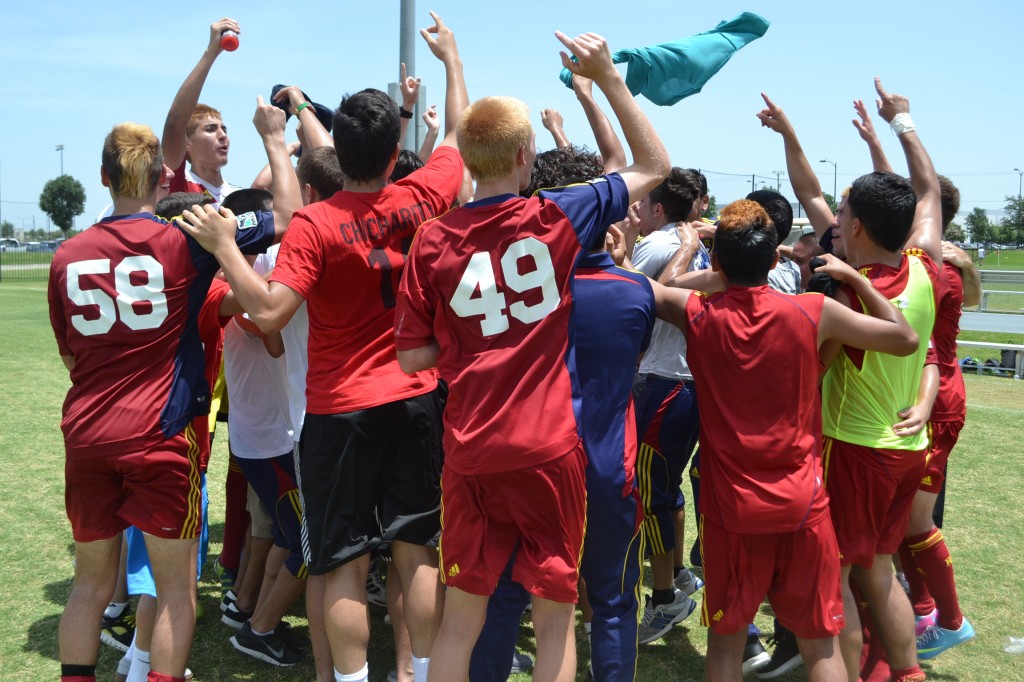 Real Salt Lake U-16’s had arguably their best three game stretch all season long last week in Dallas. In three group games they outscored their opponents ,8-3, and held two teams scoreless. They also won their group and have advanced to Finals Week in Houston. This marks the second time in RSL Academy history that the U-16 team has won their group.

Many players on the U-16 team played well in the playoffs and other players had great performances. Below are a few players who had the most noteworthy performances.

GK – Chase Bishov – Had two shutouts and made double-digit saves in the three games he started. Was very aggressive and made smart decisions. Biggest save was against FC DELCO when a player had a 1v1 with Bishov. He ran out to meet the player, making himself as big as possible, and blocked the shot preserving the shutout.

LB/LW – Diego “Diablo” Silva – Scored the opening goal for RSL in the playoffs and picked up another in the FC Dallas game. Silva is a nightmare for most teams on the wing due to his ability to pass out of the back and his quick bursts of speed that allow  him to get involved on the offensive side.

FW – Brooks Lennon – Scored 2 goals and as always was a handful for teams to defend on the wing. Lennon missed out on a few chances but did create many other opportunities for teammates with crosses and passes into the box.

LB – Moises Rodriguez – About three months ago, coaches moved Rodriguez to LB and since then he has blossomed. Rodriguez looks and plays very comfortably with the ball and can make big stops when needed. Against FC Dallas & Chicago Sockers, Rodriguez stonewalled many attacks.

MID – Jack Gayton – Controlled the middle of the pitch, was aggressive and made clean passes. What you expect out of a midfielder in a 4-3-3. Best game was against Chicago Sockers. He stopped numerous attacks and had a few looks on net.

MID – Fito Ovalle – Like Gayton, Ovalle was a beast in the midfield. Ovalle also has the ability to attack into space and when he does he becomes even harder defend. Worked back after every run and made timely slide tackles in every game.

CB – Justen Glad – Was arguably the best player in playoffs. RSL’s defense was exposed a few times and if it wasn’t for Glad’s reaction and timely slide tackles things could have been different in the Chicago Sockers & FC Dallas games.

FW – Bofo Saucedo – Scored 3 goals, including the opening two in the FC Dallas game. Was very vocal and showed leadership in the FCD game. Best goal was against FC DELCO when he dribbled from box-to-box and sent a screamer into the right side netting.