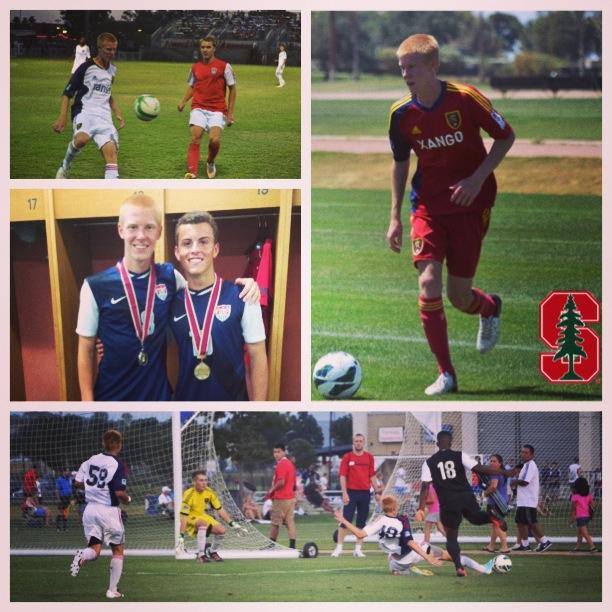 CASA GRANDE, Ariz. – The Grande Sports Academy home of the Real Salt Lake Arizona Academy is pleased to announce the commitment of Justen Glad to Stanford.

The Stanford Cardinal men’s soccer team has become a hotbed for GSA graduates, as Glad has become the third player from the GSA to commit to the program.

“It’s obviously a very good school and I really like the campus,” he said. “My former teammate Trevor Hyman is in his first year there and my current teammate Corey Baird is also committed there for next season.”

Last year was Glad’s first season at the GSA and he emerged as one of the most promising prospects in the Real Salt Lake academy system. Just months after he joined, he impressed at the 2012 U.S. Soccer Winter Showcase in Florida and was offered a spot in the Under-17 Residency Program in Bradenton, Florida.

He participated in the 2013 U-17 CONCACAF Championship, which determined the 2013 FIFA U-17 World Cup participants from CONCACAF. After the U-17 MNT were eliminated from the World Cup, he continued to receive call ups to the U-17 MNT and saw action in the Caspian Cup in Azerbaijan and an international tournament in Niigata, Japan.

Glad has also seen extended playing time with the Real Salt Lake Reserve League squad. In just his second call up, Glad became the first academy player in the 2013 calendar year to be named to the starting XI in 1-1 draw on Sunday, September 8th against Portland Timbers.

Glad, who hails from Tucson, Arizona, also felt it was important to keep some family traditions alive, which helped his decision.

“My dad went to Stanford and I have wanted to go there ever since I was a kid.”

Stanford has had a long history and Glad is ready to help the program return back to national prominence.

“I want to be on a successful college team and I think Stanford will provide that,” he said. “Hopefully we can contend for a national championship.”