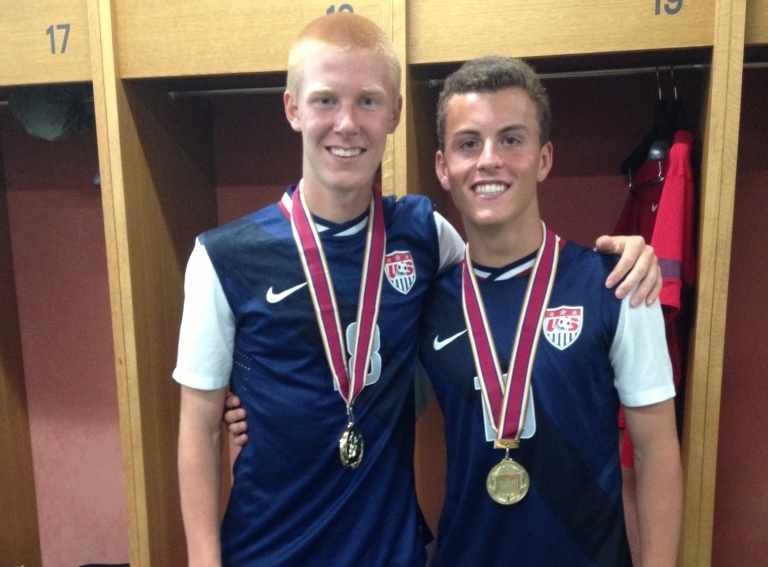 CASA GRANDE, Ariz. – Justen Glad and Brooks Lennon wrapped up their final appearance with the U-17 MNT an a positive note defeating Japan, Croatia and the Niigata All-Star team en route to winning an International Tournament in Niigata, Japan.

Glad and Lennon are not too old to qualify for the U-17 MNT going forward and will be looking to make their mark on the U-18 MNT once that camp kicks-off in August.

In Japan, Lennon played in all three games starting against Croatia and the Niigata All-Star team. Glad played in two games and was a starter in the Croatia game.

Grande Sports Academy had a chance to catch up with the boys after the tournament.

Grande – Last ever cycle with the U-17 MNT, how special was it to get the final call-up?

Glad – “It was a great experience. As always it’s an honor to play for your country, being at U-17 Residency with those kids it made it even more enjoyable because we made the best of it and we ended up winning the tournament so it was a good note to end on.”

Brooks – “Another great opportunity for me to express myself and to show my talents and I was really happy to go with the Residency group because I have never been in a camp with the ’96′s so it was a great opportunity and was happy we went there and won the championship.”

Grande – How was it playing against the other teams?

Justen – “It was really fun playing Japan and Croatia because they both qualified for the World Cup, so beating them felt really good it as a little bit of redemption.”

Brooks – “I think also Croatia was also on a 35-game winning streak so beating them it felt really good.”

Justen – “They got out of the group of death in Europe. They beat Spain, Italy and Belgium.”

Grande – What was the Niigata All-Star team?

Brooks – “They were kids from all over Japan.”

Grande – How was the local culture?

Brooks – “It was so nice we got to go to an elementary school and see what the kids have to go through every day. It was so different from the U.S. I appreciate that I now live in the U.S., because these kids work so hard at such a young age. It was cool seeing their culture, seeing what they do, and respect for others. They bow a lot for a sign of respect. I thought their culture was super cool.”

Justen – “Everyone is really respectful. If you talk to them they will be polite they won’t be rude to you.”

Grande – How was the local food?

Justen – “It was my first time having sushi, it was really good.”

Brooks – “It wasn’t American sushi, like California roles. It was the real deal, just fish and rice.”

Justen – “I put some Wasabi on there, it was really good.”

Grande – Going forward what did the coaches tell you?

Justen – The next camp is in August and if we do well there will be a U-18 camp. Our teammates at RSL-AZ Academy Josh Doughty and Bofo Saucedo have been called up as well.”

Grande– What advice did they coaches give you at the end?

Brooks – “Left us with keep your confidence up and keep working hard since it was the last camp with coach Richie. Keep working hard and keep moving on and hopeful we can work our way up age group to age group and end up with the first team.”