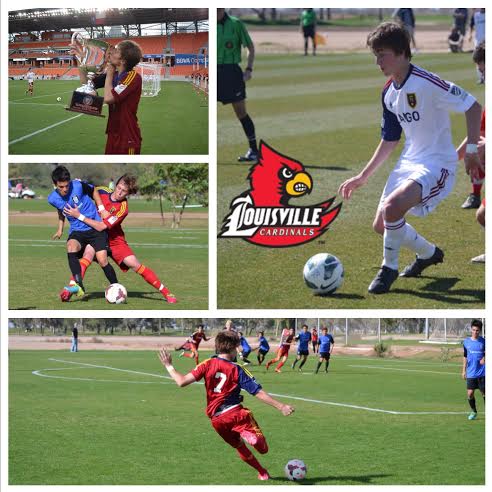 CASA GRANDE, Ariz. – The Grande Sports Academy home of the Real Salt Lake Academy is pleased to announce the verbal commitment of senior midfielder Jack Gayton to the University of Louisville.

Louisville has become a hotbed for Major League Soccer talent in recent years as six players have made the professional jump: Austin Berry, Greg Cochrane, Nick DeLeon, Andrew Farrell, Aaron Horton and Kenney Walker. For Gayton, this was a major factor in his decision.

“The coaches, the faculties and I just thought it was a good fit for me.” he said. “I feel like it’s the best chance for me to go pro.”

Gayton is currently in his second season at the Real Salt Lake Academy and has developed into a formidable midfielder for the Claret-and-Cobalt. He has started in every match for the Southwest Division leading U-17/18 Academy team and has notched 2 goals through seven matches. Last year, Gayton played for the U-15/16 Academy team and became one of the key players during postseason play. In regular season play, Gayton started in just over half of the matches he appeared in. However, during RSL’s run to the U.S. Soccer Development Academy Finals Championship, Gayton started in the final six matches including the title match win over Solar Chelsea on July 20th, 2013.

Louisville currently has two Grande Sports Academy graduates on their roster: Andrew Brody and Ricardo Velazco, who both wrapped up a very productive season their season for the Cardinals, as they advanced to the second round in the NCAA Division I Men’s College Cup.

It will be an opportunity for Gayton to reunite with his teammates and also cut the distance between he and his home in Peachtree, Georgia.

“It played a very important part. I just don’t like to be that far away from home and being able to drive back home instead of flying will be nice.”