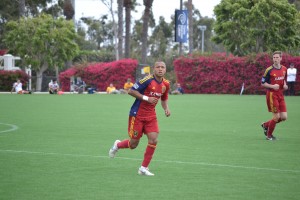 Real Salt Lake Academy defender Ive Burnett has been called up by the senior club for their reserve league match vs Chivas USA. Burnett will be joining teammate Coco Navarro who received his 6th call up. For Burnett this is his second call up he has received. He played 9 minutes in a 2-1 defeat over BYU in early April.