NOTE: “Inside the Grande” is a weekly feature in which we peer inside the inner workings of the Grande Sports Academy. We take a peek behind the curtains and discuss various topics about the off the field success at the GSA. 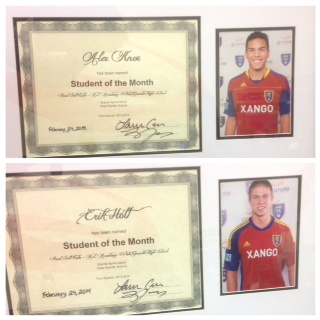 CASA GRANDE, Ariz. – The Academic Staff at the Grande Sports Academy honored two students for the third quarter of the 2013-14 school year.

The two players honored were sophomore Alex Knox, who is currently in the mist of his third year at the GSA, and junior Erik Holt, who joined the GSA before the current school year and verbally committed to UCLA in November 2013.

“Alex Knox has an eloquent way with words,” said English tutor Teresa Ly. “He inspires excellence and is always quick to help a teammate on and off the field. He has a deep appreciation for the incredible journey he has found himself on at the academy. Erik Holt is a leader both on and off the field. He is as big of heart as he is of stature and always promotes a sense of safety among his teammates. His dedication and hard work is evident in every aspect of his life.”

Knox, who joined the GSA as an 8th grader, has never held a GPA lower than a 4.0 and credits the GSA Academic Staff to his success saying, “I think that’s it’s not only important to work hard on the field, but also in the academics too because that can really give you and edge going to college. ”

The fall 2013 semester was a special one for Holt, who earned his first GPA over 4.0.

“It’s great to have all the tutors, Holt said. “They are very helpful and helped me get all my grades and everything sorted out. It’s great to see all the guys and they really helped me out.”