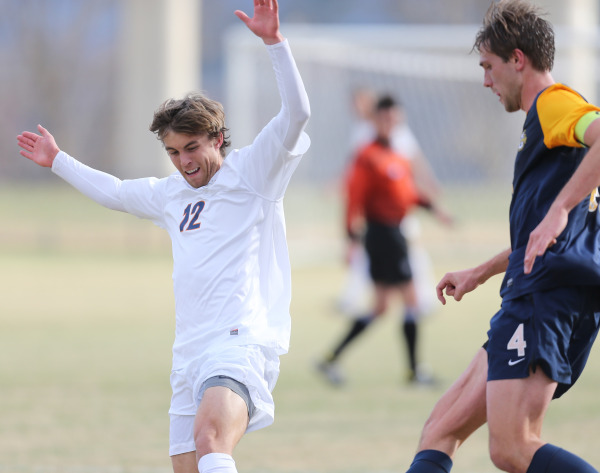 CASA GRANDE, Ariz. – The 2013 Men’s College Cup is coming down to the wire and five Grande Sports Academy graduates, out of the original nineteen who qualified for NCAA Tournament, are still alive as they have helped their teams advance to the Elite Eight, which will be played on Saturday.

For a full run down on all the weekend’s College Cup action, check out the recaps below.

In the first of two matches to pit GSA graduates against each other #8 Virginia, Riggs Lennon and Jordan Allen hosted #9 Marquette and Coco Navarro on Sunday morning. Virginia went down to 10-men when a player was shown a red card 57 seconds into the match when he tackled a Marquette player from behind. Despite the advantage Marquette couldn’t crack Virginia’s defense and went down a goal on a free kick in the 23rd-minute. Virginia doubled their lead minutes into the second half and sucked the life out of Marquette when Virginia scored their third and final goal just 20 seconds after Marquette cut the lead in the 52nd-minute. Allen and Navarro were both named starters and played 90 and 82 minutes, respectively. Allen just missed out on Virginia’s fourth goal when his shot from outside the 18 hit the crossbar. Lennon came off the bench and played 3 minutes.

#1 UCLA and Cole Nagy were knocked out of the College Cup, losing to Connecticut on penalty kicks 5-4 after both sides traded six goals in a thrilling Sweet 16 match. Nagy did not feature in this match.

#2 Washington and Danny Gavin eliminated Pac-12 conference rivals Stanford and Trevor Hyman 1-0 on Sunday night. Gavin and Hyman did not feature in this match.

#7 New Mexico continues to roll as they posted their second consecutive shutout in a 2-0 win over Penn State. New Mexico’s Josh Goss and Lucas Seligman did not feature in this match.

#12 University of California – Irvine and Elliot Farmer were knocked out of the tournament by #5 Maryland, 1-0. Farmer did not feature in this match.