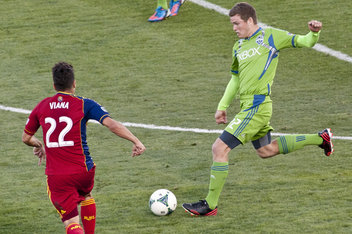 CASA GRANDE, Ariz. – GSA Exports is a feature in which we track the progress of former Academy players who are playing at the next level. There are currently 8 players with ties to the Grande Sports Academy playing in 5 different countries.

NOTE: Nico Muñiz signed with RSL, and is no longer with a team.

All descriptions are from games between October 15th-22nd.

In picture: Eriq Zavaleta in green.

Benji Lopez, F, Real Salt Lake: Not in the 18 for RSL’s scoreless draw with Portland on Saturday.
Season: 0 games, 0 starts