The Grande Sports Academy U-16 & U-18 Elite teams participated in their first tournament of the 2013-14 season when they traveled to California over Labor Day weekend to play in the 2013 North Huntington Beach Cup.

The U-18 Elite team went into the tournament looking to defend the NHBC U-19 title they won in the 2012 edition of the NHBC.

Pregame notes: The U-18 Elite team was drawn into group #1 with five teams total in the group. Each team in the group will play each other once and only the winner of the group will advance to the semifinals, which will be played on Monday. 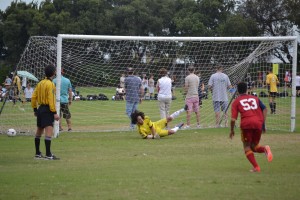 SD Surf Academy came out aggressive in the early moments of the match forcing goalkeeper Miguel Martinez to make some crucial saves. The first in the 8th minute when he made a diving save to his right and the second in the 11th minute when a SD Surf attacker broke through the defense. Martinez ran out, calmly stopped at the 18 and stonewalled the threat.

The U-18 Elite team settled down moments later when the veteran leadership of Adam Ferguson and Aaron Herrera locked down the midfield intercepting SD Surf attacks, which allowed attacking midfielder Matthias Binder plenty of space to create chances. In the 18th minute Binder took a shot from distance that troubled the SD Surf goalkeeper. RSL continued to attack and apply pressure in the final third and their persistence paid off when Herrera cut off an errant goal kick from the SD Surf ‘keeper. Herrera took touch and then played an excellent through ball to Luke Novick who calmly slotted the ball near post.

RSL’s next best chance before the half came from Herrera when his shot was remarkable saved by a diving SD Surf goalkeeper.

After halftime, SD Surf came out aggressive and asserted their dominance in the game. Martinez was called upon multiple times and showed his toughness when he ran out and made a diving punch to clear a corner in the 32nd minute.

RSL did have two chances in the half: the first in the 49th minute when Novick’s shot was blocked and another in the 52nd when Herrera’s shot from distance was saved.

With minutes remaining Martinez made the save of the game in the 58th minute when he dove to his right and blocked a PK. Seconds later he made another save when he punched a dangerous floating shot over the crossbar. After he kicked the ball into play the final whistle was blown giving the U-18 Elite team a 1-0 victory.

Pregame notes: In tournament play every game is practically a must-win and the U-18 Elite team started off on the right foot by defeating SD Surf 1-0 a few hours before. 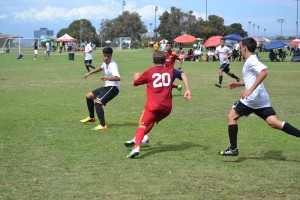 The U-18 Elite team dominated the pace of the match moments after the opening whistle, but lacked quality in the final, which ultimately doomed them.

RSL found a weak point in the Legends defense and started to direct all the attacks down the left-wing. Luke Novick was relentless winning many 50-50 balls and providing smart attacks down the wing. Victor Alvarez and Danny Moreno had shots blocked in the 12th minute when consecutive shots inside the 18 were blocked. Alvarez and Nate Deaton battled for headers in the box, but were unable to redirect the ball towards the net. Adam Ferguson, Matthias Binder and Nicholas LaMonica provided stable support in the back, which contributed to all these opportunities.

The one thing RSL was lacking was the finishing effort. RSL’s efforts went to waste when Legends delivered a crushing blow in the 26th minute. A RSL defender slipped allowing the attacking player an open look on net. One minute later, Legends grabbed another goal when a turnover by the RSL defense in their half was converted by the opponents.

Legends wasted no time after the halftime break when they scored their third goal in the 41st minute and their fourth in the 50th. The first 20 minutes were near-perfect for RSL, and the players learned a hard lesson. It’s not how you start, but how you finish. The 4-0 loss, made the next two games on Sunday, must-wins.

Pregame notes: The loss in the second group game meant that this third match was a must-win. 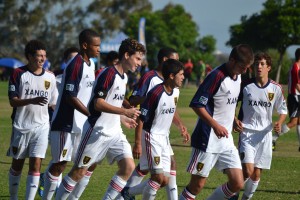 The third group match for the U-18 Elite team was a must-win and heading into the match RSL were determined to finish their chances early on. This became a reality for RSL in the 11th minute when consistent pressure from Trent Lowe allowed him to poke at a ball in the box. The Cyclones goalkeeper lost track of the ball and made a desperate attempt to clear the ball as it rolled into the back of the net.

RSL doubled their lead in the 17th minute when Ishan Atit fired a shot from the left side, which was blocked by a defender. He picked up the bouncing ball and fired another shot hitting the right-side netting.

Trent Lowe had another chance in the 34th minute when he dribbled into the box and sent a lofting ball across the face of net. The ball appeared to have hit the inside part of the net, but the ref didn’t signal for a goal. RSL’s third goal came in the 42nd minute when a deflected shot fell to Gavino Carranza just outside of the box. He took a touch and rifled a low screamer that curved into the near post.

RSL’s final goal came when Aaron Herrera played a ball over the top to Victor Alvarez. Alvarez spun around the defender and beat him in a footrace to the ball. He took a touch and finished far post. The 4-0 win was RSL’s best effort on the weekend. Even though they didn’t show up in the score sheet, outstanding play from Matthias Binder, Josh Taylor, Danny Moreno and Tevin Lowe helped propel RSL to the victory. 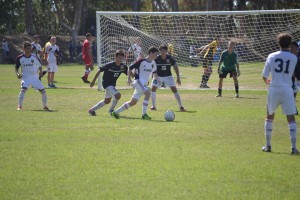 The U-18 Elite team faced a must-win game in the final group match of the NHBC, and they made the task even more difficult when CUSC countered in the 5th minute and scored the opening goal.

RSL played catch up for the rest of the half and never created any opportunities. RSL went into the half with one thing in mind; they needed a change and coaches made a formation change pairing Luke Novick with another forward. It almost paid off within seconds, when Novick dribbled down the wing to the touch-line. He then cut in and passed to an unmarked RSL player whose shot was blocked.

The break for RSL came in the 36th minute when Aaron Herrera sent a spot kick into the box. Trent Lowe headed the ball back into the middle of the box and Nate Deaton then headed the ball into the net. RSL continued to attack the CUSC net, but had bad luck on their side. Attack after attack was stopped by the CUSC defense that was able to hold on for the draw allowing them the one point and advancement to the semifinals.