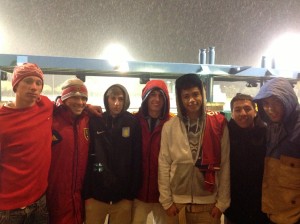 Three of the teams – New York Red Bulls replace Vancouver Whitecaps – have returned to Arizona to participate in the Desert Diamond Cup hosted by FC Tucson.

The annual preseason tournament pits four MLS teams against each other in round-robin play. Grande Sports Academy players braved the bizarre snowfall in Arizona for a chance to see some of their favorite players.

Radu Marcu made the most of his time by dancing in the snow.