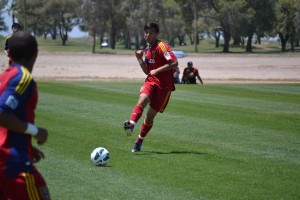 Grande notes is where we report and take a look at all the happenings going on at the Grande Sports Academy home of Real Salt Lake Arizona Academy.

Te Wihongi, from New Zealand, made his Academy start for Real Salt Lake when he was named to the starting XI vs Chivas USA on May 4th. For Wihongi it shows all the hard work he has been putting in over the past few months. The start was bittersweet, however, as Chivas defeated RSl 3-2 .

“It felt good,” said Wihongi when asked about his performance. “I’m a bit disappointed in how I performed but there is always a second chance and hopefully I can get that soon.”

The following day Wihongi was not named a starter against the LA Galaxy but did enter the game in the 85th minute to provide a spark for the defense. Last year Wihongi spent a few weeks at the Academy and impressed the coaches, which allowed him to join the Academy in January of this year. As most players learn, earning a spot in the starting XI is no guarantee as it takes hard work and even more hard work.

“It’s a great achievement and it feels good. I hope it keeps going.” 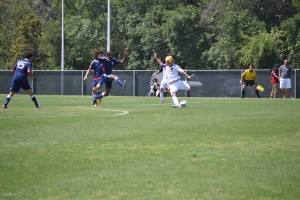 The RSL U-18 Academy team have been without the services of one of their most dynamic players, Benji Lopez, since mid-December.

“It felt good to be back out on the field and playing with the team again against Chivas USA,” said Lopez. “I didn’t feel to bad on and of the ball and I wasn’t as sharp as I would like to be but overall I felt fine.”

As the U-18’s adjusted to life without Lopez, who was dealing with an injury that wouldn’t go away, they went W8-L4-D1 and have put themselves in a great playoff positioning. However as opponents get tougher the U-18’s will need the services of all players and Lopez wasted no time letting him teams know how important he is to the team in his return.

Lopez entered the game as a sub in the second half and scored for RSL in the 90th minute as they attempted to come back against Chivas USA. Lopez’s shot, from the wing, was so powerful it hit the ‘keepers hands and went in.

“It felt good,” Lopez said when asked about the goal. “I thought it was going to be a while before I scored again but it felt good and it gave me some confidence.”

On the season Lopez has played 14 games scoring 12 goals.