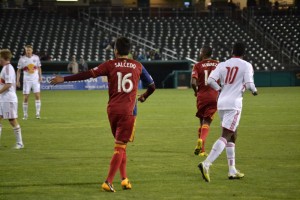 Real Salt Lake (RSL) has now been in Arizona at two different times for a portion of their 2013 preseason. The first time they came down was when they stayed and trained at the Grande Sports World. After spending about a week here they left and have now returned back to participate in the Desert Diamond Cup (DDC) hosted by FC Tucson. The other three teams that are playing in the tournament are: New York Red Bulls (NYRB), Seattle Sounders and New England Revolution.

One player that has been traveling with RSL is former Academy defender Carlos Salcedo who joined the club during the summer of 2012 after graduating from high school signing a Home Grown Player contract.

Wednesday was the first day of the DDC and in the early game Seattle defeated the Revolution 2-0, with goals from Eddie Johnson and Phoenix native Brad Evans.

Salcedo, starting at CB, performed well throughout the game making some important stops on the wing. He also saved a potential goal when Henry received a cross on the left side, dribbled straight at the goal and passed into the box which went into a dangerous empty zone in front of RSL’s goal. Salcedo emerged out of nowhere and cleared the ball before Cahill could one time the shot. Salcedo played the entire first half and a portion of the second half before he and 9 other teammates were all subbed out at the same time in the 62nd minute.

GSA had a chance to catch up with Salcedo and Kreis after the game.

GSA – A lot has changed in 8 months for you. What is it like looking across the pitch and seeing players like Henry and Cahill?

Salcedo – It feels good, but at the end of the day we’re professionals. We sacrificed a lot of things at the Academy but it pays off and it feels really good to be on the pitch playing against those guys.

GSA – Last year you joined RSL while the season was in progress. How has it been different this year?

Salcedo – It’s way better.  Feels way better to start at the real season versus the middle of the season. I feel like I’ve been really good but still little details and stuff like that to improve.

GSA – What did you think of Salcedo’s performance tonight?

Kreis – I thought he was good. really quite good. he is a guy that is very young. but doesn’t show it. mature for his age and his play and tactical thinking. Impressed with where he is but he has a lot of room to grow still but I the future is looking food for him.