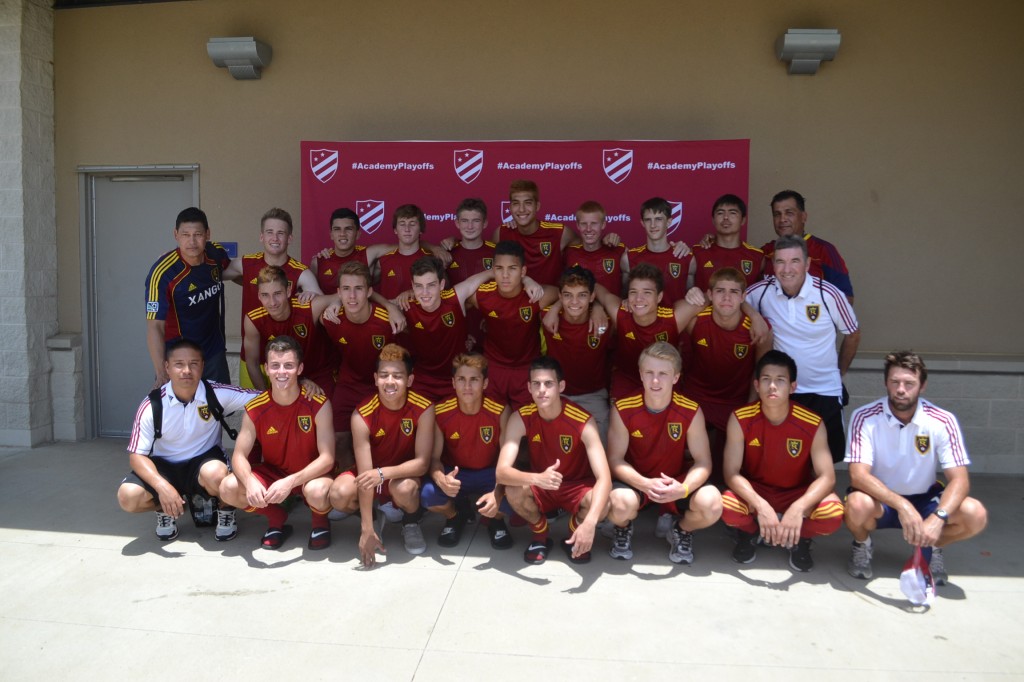 Casa Grande (Tuesday, July 2nd, 2013) – The Real Salt Lake Academy U-16’s will be looking to build on their successful performance in the U.S Soccer Development Academy Playoffs last week in Fisco, Texas where they went undefeated and finished at the top of their group advancing them to Finals Week.

U.S. Soccer held the draw for Finals Week earlier this week, which will be held in Houston, Texas between July 14-20. Real Salt Lake has been drawn into group 4 along with Houston Dynamo, Texans SC Houston and Albertson SC.

This marks the second time in the 2013 playoffs that Real Salt Lake has been drawn into a group with a team that is playing in their own backyard. Both Houston based clubs won their three group matches while Albertson SC suffered one loss.

In the Development Academy Playoffs, Real Salt Lake opened group play up with a 2-0 victory over FC DELCO. Diego “Diablo” Silva scored the opening goal, and Sebastian “Bofo” Saucedo added another in the second half when he dribbled from box-to-box, and fired a screamer into the ride-side netting. In the second match, Real Salt Lake picked up a valuable point in the scoreless draw with the Chicago Sockers.

Sitting on 4 points, and heading into the final game, Real Salt Lake faced a must-win match against FC Dallas, who were leading the group with 6 points. Real Salt Lake put immediate pressure on their opponents when they scored two quick goals. Saucedo scored his first in the 2nd minute assisted by Brooks Lennon, and his second 5 minutes later when he headed in a Silva cross. Real Salt Lake extended their lead in the 35th minute when Lennon dribbled in from the right-wing, and hammered in a low shot into the right corner.

FC Dallas managed to score before halftime, and came out of the break playing more aggressively.  This exposed FC Dallas defensively as they pushed players forward. Real Salt Lake picked up another goal on a counter when Silva picked up a deflected shot in front of the net. This woke FC Dallas up, and they stormed back with two quick goals in the 66th and 68th minute.

Real Salt Lake put the comeback on hold as they then scored 2 goals in the closing minutes. Josh Doughty in the 75th minute, and Lennon from a PK in the 77th.

FC Dallas had little fight in them left after this giving Real Salt Lake the win, and the top spot in the group.

Heading into Finals Week, Real Salt Lake will face Albertson SC in the first match on July 14 at 5:30pm. They then will face the two local clubs Houston Dynamo on July 16th at 8:00pm followed by Texans SC Houston on July 18th at 5:30pm. All games will be held at Houston Amateur Sports Park with all times listed in CT.