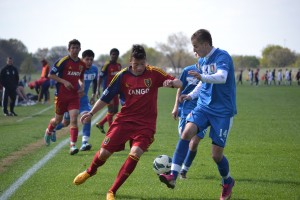 Starting XI: Eric Gonzalez, Santi Carrillo, Brandon Marquez, Corey Nemeth, Jon Zabasajja, Tigran Tiraturyan, Andrew Brody, Jose Hernandez, Coco Navarro, Aidan Tucker,and Luis Barraza.
Quick Summary – Both goals for RSL were scored in the second half. Corey Nemeth deflected a ball into the back of the net from a free kick, while Coco Navarro scored inside the 18. Forward Aidan Tucker – “What is your initial reaction to the week?” – “It was pretty successful and we played really well. We got a lot of goals so I thought it was successful but we should have gotten farther.” 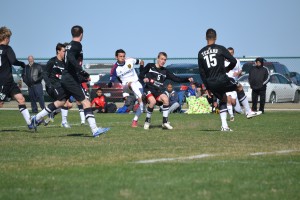 Group Game 2 – RSL draw Dallas Texas, 1-1. Full recap here
Starting XI: Elijah Evans, Santi Carrillo, Brandon Marquez, Corey Nemeth, Jon Zabasajja, Tigran Tiraturyan, Andrew Brody, Jose Hernandez, Coco Navarro, Aidan Tucker and Luis Barraza.
Quick Summary – Aidan Tucker scored in the first half and a dominate second half performance by RSL wasn’t enough as a shot by Dallas caught the wind and floated into the back of the net for the equalizer.
Goalkeeper Luis Barraza – “Thoughts on RSL’s performance?” – “The whole team performed well. It was a good experience for our players and for our academy. We all gave it our best and got the result going to the quarterfinals. It was a great experience for me and the boys and I hope next year we come back and do better.” 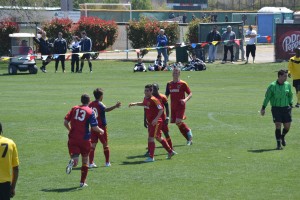 Starting XI: Eric Gonzalez, Santi Carrillo, Bayley Scholz, Corey Nemeth, Jon Zabasajja, Tigran Tiraturyan, Andrew Brody, Jose Hernandez, Coco Navarro, Aiden Tucker, Luis Barraza.
Quick Summary – RSL needed goals to secure advancement out of group play. Three goals in the first half by Aidan Tucker, Tigran Tiraturyan and Jose Hernandez and three more in the second half by Ishan Atit, Coco Navarro and Aidan Tucker helped RSL cruise to an easy victory. Lewisham did score 2 late goals but the +6 goal differential helped them win the group and advance to the quarterfinals.
Assistant Coach Tim Seketa – “What do the coaches take from Dallas Cup?” – “Dallas cup was a positive experience. It’s the premier youth tournament in U.S. Soccer right now. To get out of the group stage is a huge accomplish. We are proud of the boys and everything they did. They put themselves is a good position. It’s unfortunate we lost in the quarterfinals but he coaching staff is happy with the performance and the effort given by the players.” 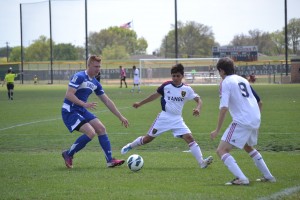 Starting XI: Luis Barraza, Corey Nemeth, Jon Zabasajja, Eric Gonzalez, Brandon Marquez, Tigran Tiraturyan, Andrew Brody, Adam Ferguson, Jose Hernandez, Coco Navarro and Aidan Tucker.
Quick Summary – Tough loss for RSL as IMG scored within the opening minutes. RSL looked sharp after the goal but wasn’t able to find an equalizer. IMG picked up another goal on a counter late in the first half. RSL struggled through out the second half and a third goal by IMG sealed the victory.