In a weekend that pitted Real Salt Lake-Arizona’s soccer academy against one of the best academies in the country, the Los Angeles Galaxy, there was a feast of goals as RSl-AZ’s Under 18 academy scored seven goals in 3-1 and 4-1 victories. RSL-AZ Under 16 academy lost 3-0 and tied 2-2. 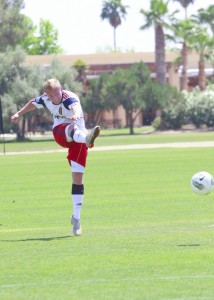 The Galaxy has one of the stingiest defenses in the country giving up only five goals in nine league games and 12 goals overall in 18 games played. Real Salt Lake-Arizona led by Maikon Orrellana and Jean Pierre Bello, scored seven goals against the Galaxy in two games.

In the first game of the weekend, LA Galaxy took the lead on a goal by Jose Villarreal in the 31st minute. Ten minutes later the game was even as Orrellana, on a great feed from Ricardo Velasco, drove the ball home.

RSL-AZ continued to attack as the Galaxy defense wilted in the heat. Orrellana was again the scorer, notching his second, after a great individual run from the United States U-18 International player, Jordan Allen. Allen, who was tormenting the Galaxy defense with his exploits down the left flank, finished the scoring in the 66th minute with a superb goal. 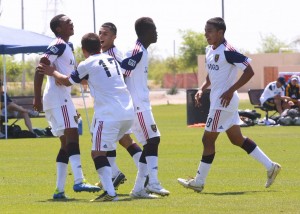 In the U-18’s second game of the weekend, Real Salt Lake-AZ continued its attack. The LA Galaxy held firm throughout the first half, but they could not stop the eventual goal rush. Seven minutes into the second half, Bello went in on goal all alone and was upended by the Galaxy goalkeeper. The referee had no hesitation pointing to the spot and Bello stepped up to hammer the ball past the goalie and into the net.

Barely 10 minutes later, Real Salt Lake-Arizona went two up. Carlos Salcedo on a tremendous individual effort, pushed forward from his defensive position, to challenge the Galaxy goalkeeper. Again the keeper pulled down the Real Salt Lake-Arizona player and the referee once again indicated a penalty kick. Bello stepped up and put the goalkeeper the wrong way with his well-placed spot kick. Bello completed his hat trick in the 75th minute giving his team a three goal cushion. 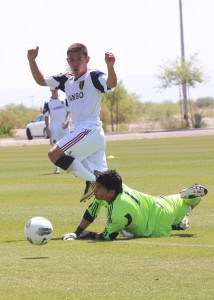 LA Galaxy showed their quality, not willing to go home with their tails between their legs and they continued to push forward. In the 87th minute they were rewarded. Pedro Lugo, redirecting a free-kick from the left wing, pulled one back for the Los Angeles academy, but it was not enough as RSL-AZ continued to attack.

RSL-AZ was stung by the loss of the shutout and turned up the heat. Etiandro Tavares finished off the scoring with a fine individual effort in the 90th minute giving Real Salt Lake – Arizona the three points and all six points available on the weekend.

RSL-AZ’s U-16 squad started their first game of the weekend in good form, tied 0-0 at half time despite having several good chances. RSL-AZ became undone in the second half as central midfielder, Luis Chavez, was shown a straight red card for a two-footed tackle. Down a man, it was only a matter of time before the LA Galaxy would press home their advantage. 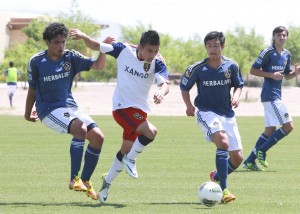 Within two minutes after the sending off, Galaxy was awarded a penalty kick. Rolando Munoz stepped up and finished his chance. Galaxy continued to possess the ball taking full advantage of their extra player. Two quick Galaxy goals from Josue Espana and Justin Dhillon in the 64th and 69th minutes, respectively finished of the game and gave Galaxy the three precious away points.

The U-16’s second game of the weekend started off similar to the first, but this time RSL-AZ took their chances and went two goals up at halftime. Trevor Hyman scored the first with a well-placed shot into the back of the net. Benji Lopez then hit an unstoppable shot from all of 30 yards that the Galaxy goalkeeper did not see until it hit the net behind him. 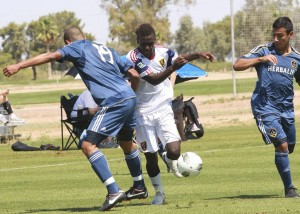 The second half was another story as Real Salt Lake-Arizona faltered in the heat. In a seven minute spell, RSL-AZ gave up two goals. Despite pressing forward and taking the game to the Galaxy, Real Salt Lake-Arizona could not capitalize on their possessions and the Los Angeles team hit them on the break, Juan Reyna scoring the Galaxy’s first goal.

LA then got the equalizer as the RSL-AZ defense dropped off, leaving the opposition’s midfielders open and with no pressure on the ball. Danil Slepukhin hit a long drive over the outstretched hands of RSL-AZ goalkeeper Cesar Cobos for the tying goal and a share of the spoils.

Real Salt Lake-AZ’s soccer academies continue their season at the Grande Sports World on Sunday, May 6 versus The Seattle Sounders.