Grande Sports Academy caught up with U16 Academy player Brooks Lennon who was recently called up by U.S. Soccer to participate in a U17 MNT camp. Lennon was also joined by academy player Bofo Saucedo. Lennon played in two games whill at camp and scored 2 goals and had 2 assists in them. Below is a Q&A with Lennon about camp.

Grande – “How did you find out that you were called up?”

Brooks – “I was in school and my mom texted me and told me I got the email from the U17’s and it was a couple of days before we went. I was the last player to get called and I’m thankful I got a chance.

Brooks – “I have been working for this moment all year. This is my potential goal. When I heard I got called up I was so happy that all my hard work has paid off.”

Brooks – “It was crazy because all the players I know from other things and camps. All the players are unreal and such good guys and good players. It was so fun walking in getting to represent my own country.”

Brooks – “Having Bofo there was so great because I knew someone right of the bat. It was really nice having him there.”

Grande – “What did you learn at camp?” 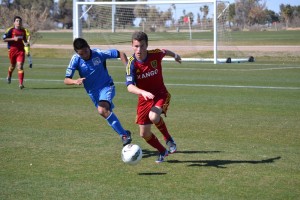 Brooks – “I learned that if I work hard I will have these opportunities and I will get these chances. When I do get them I need to take advantage of them, work hard and do everything I can do to help the team.”

Grande – “How has being at GSA helped?”

Brooks – “Being at Grande has helped so much with Martin, having him as a coach and mentor definitely has helped. Being at grande has helped me so much because the level of play is just like the U.S. teams and it prepared me so well.”