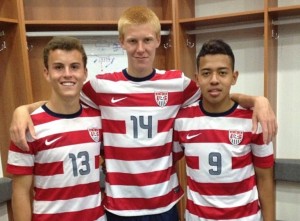 This five-day camp is designed to evaluate and build the core for the U.S. Under-18 Men’s National Team pool, according to a release sent out by U.S. Soccer.
Doughty, Glad, Lennon, Saucedo were all members of Real Salt Lake’s U-16 team that just won the U.S. Soccer Development U-16 Academy National Championship. The latter three all scored goals in the championship game against Solar Chelsea. The RSL Academy players will join 60 other players from all over the nation at the combine.
Earlier this year Glad was a member of the U-17 Residency Program located in Bradenton, Fla. He saw action in the 2013 CONCACAF U-17 Championship that determined the participants from the CONCACAF region for the 2013 U-17 World Cup. The U-17 MNT were unfortunately eliminated from the World Cup when they lost to Honduras in the quarterfinal.
In May, Glad was called up again to U-17 MNT and this time was joined by teammates Lennon and Saucedo for the Caspian Cup. Lennon and Saucedo each had a breakout performance in the cup. In 4 games, Lennon scored 7 goals, Saucedo notched 3 and Glad helped anchor a backline that recorded two shutouts.
After the U-16 Academy team qualified for Finals Week, U.S. Soccer called up Lennon and Glad for a international tournament in Niigata, Japan. The U-17 MNT went undefeated in three games en route to winning the international tournament. 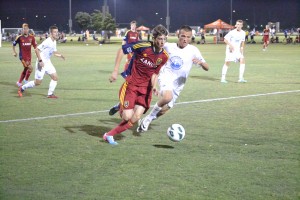 This is the first time Doughty will appear in a camp for the U.S. Soccer. Previously, he participated in a U-17 Canadian camp.